This weekend we have a nice batch of $10 cds for you guys, along with a big batch of restocks from our friends at GEAR FAB, purveyors of garage and psych 60s and 70s reissues!

Plus a few more of those GREG SHAW T shirts, they are selling FAST and obviously won’t be any more! We have just donated to a museum a very cool demin jacket that Greg and the Mojo Navigator crew drew back in 1966 with cool psych art, featuring pre Grateful Dead bands like Mystery Trend, Freedom Highway and the Great Society. Obviously THAT is not for sale, but you can get in on the T shirts. 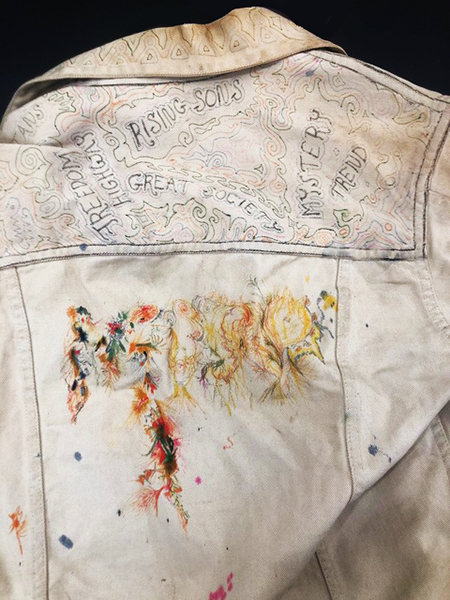 Thanks for all kiddies, love you guys!
Suzy Shaw

I finally decided to dig around in the box labeled “GREG’S T SHIRTS” that has been here in our warehouse for 15 years. Some very cool shirts! A YARDBIRDS T shirt that he allegedly wore to the Monterey Pop Festival sold for $3,000, and his Granny Takes a Trip jacket recently went for $550 on E bay, but I wont charge you those prices!These are not pristine,but neither was Greg, ha ha. No serious damage on any of them but I have left them as is .

WILLIE NELSON-ONCE OWNED (NOT WORN) BY GREG SHAW! Label:NONE OWNED, but probably not worn! This is from the box of shirts brought in from Greg’s house when he died, BUT I doubt he ever wore this. All the same, cool shirt. M 100% cotton, 32” across chest. APPAREL $25 SKU:23629

ORIGINAL SINS- Self Destruct (60s Power Pop)Label:SKYCLAD Guitar/power/pop BLAST from one of the best rock bands from PennsylvaniaThis album is heavier and rawer then the previous releases. Thick psychedelic rocksound with wailing organs and majestic blasts of sneering fuzzoverkill guitars. This record is dedicated to Velvets, Stooges, Seeds, Ramones and Bo Diddley. CD $10 SKU: 23631

CYNICS- Get Our Way ( 60s style garage psych )- Label:GET HIP Return to their garage roots with tinges of psychedelia sprinkled in for good measure. CD $10 SKU:10897

FUZZTONES - Horny As Hell (GARAGE rockers from Rudi Protrudi ) Label:NO FUN It's been some hard years for all fans of The Fuzztones. Finally the last record 'Salt For Zombies' was released in 2003. The longing for a new record is over and it was worth waiting. 'Horny As Hell' is one of the best Fuzztones creations ever! It brings you all that the Fuzztones are legendary for and much more. Mastermind Rudi Protrudi comes up with a 3 piece horn section and 4 female backing vocalists to get you the groove and to spearhead the new Garage Soul Movement that's rapidly sweeping Berlin (where the band now resides) and soon the rest of the world. So this time it's not only the Fuzz Madness that will blow your mind but also horns from hell - 'nomen ist omen'. The CD offers 17 tracks of hard-driving, hook-laden Rock 'n Roll anthems - the stuff that has made The Fuzztones inspirations to bands such as the Hives, the Horrors, and many more of today's 3rd generation of Garage rockers. Including future favorites 'Garden Of My Mind' and the Pretty Things track 'Alexander' which features Pretties' bassist and occasional lead singer Wally Waller as well as brand new versions of Fuzztones classics 'Ward 81' and 'She's Wicked' done in 'Big Band'-style. And last but not least get wild with Rudi's hypnotic vocal delivery - just as energetic and vital as when he formed the band 28 years ago! Additionally the band has made up a special tour this fall to make you go wild'n fuzzy! For that the Fuzztones 'Gonn Primitive' as Craig Moore of the garagepunk legend Gonn! appears as special guest during the tour. CD $10 SKU:10062

ORIGINAL SINS- Self Destruct ( 60s Power Pop ) - Label:SKYCLAD 's Guitar/power/pop BLAST from one of the best rock bands from Pennsilvania. This album is heavier and rawer then the prev. ones. thick psychedelic rocksound with wailing organs and majestic blasts of snearing fuzzoverkill guitars. This record id dedicated to Velvets, Stooges, Seeds, Ramones and Bo Diddley. Sould say enough about it content. CD $10 SKU:9048

BIG BOY PETE-Return to Catatonia (60s trippy psych) -Label:GEAR FAB Yes, the Bad Boy from Norwich, UK that recorded a ton of very psychedelic material on his own between 1966-1969.Big Boy Pete was truly a Pioneer of the English Freakbeat scene. England's best kept secret!! The CD version of the Tenth Planet LP released in 1998. Includes all the original artwork and liners by David Wells CD $10 SKU:19612

COUNTDOWN FIVE -Complete Recordings 1969 GARAGE psych ) DBL CD Label:GEAR FAB Finally, the complete recorded history of Galveston’s Premier Psychedelic/Garage band. All 7 of their Pic, Toucan, Cinema, and Cobblestone 45s PLUS 20 previously unreleased recordings from 1966-1969. With the exception of their first 2 45s on Pic (Tracks 1-4), all are off the master 4 & 8 Track tapes!! Featuring their complete biography with photos, posters, and other memorabilia from their inception to final break up!! Take a trip with the band members through the greatest period of American Rock Music!! CD $14 SKU:20074

ELDERS- Looking for the Answer ( Ohio flower pop rarirty)Label:GEAR FAB Another great and as yet undiscovered album from 1970. Formerly known as Jerry & The Others and also featuring Ron Skinner from The Pictorian Skiffuls, this Dayton, Ohio band recorded this album which blended driving guitar and organ with late flower pop music. CD $10 SKU:21715

FAPARDOKLY- ST (60s pop, jangly folk-rock, psych)-Label:GEAR FAB Fapardokly is probably regarded as the most important release in Merrell Fankhausers long career, and an absolute collectors item. The band recorded about 30 tracks in a small studio in Palmdale, California, from 1965 to 1967, when the owner of the studio decided to release an album with some of these tracks. With such different recording dates, you find here different sounds..organ-ized 60s pop, jangly folk-rock, psychedelia. CD $10 SKU:18663

HELL PREACHERS INC /UGLY CUSTARD - Supreme Psychedelic Underground/ Psicosis (UK 60s psych, two great LPS on one CD! ) in mini lp sleeve -Label:GEAR FAB "From the UK, two great psych LPs on one CD, in mini-LP cardboard sleeve format. The Hell Preachers, Inc. were rumored to have had Deep Purple members Ritchie Blackmore, Jon Lord, and Ian Paice on some of these tracks but all three have persistently denied this. Ugly Custard featured the great guitar playing of Alan Parker, who was involved earlier with Hungry Wolf. From 1968 and 1971 respectively, this is fuzzed out guitar and screaming organ! CD $10 SKU:14911

MOCK DUCK - TEST Record (60s fuzzed out rarity)Label:GEAR FAB Well, we don't know what else to call this project because there were only 14 acetates made of their live recordings at The Village Bistro in Vancover, B.C. in October 1968. But
never fear, for we have unearthed the master Tapes form those sessions plus a lot more unreleased live and Studio recordings from this same period, including the 12 minute long studio session of June, 1968. Rising from the ashes of such famous Vancouver bands as The United Empire Loyalists, Cement City Cowboys and Six Cylinder, this band played a style of music that crossed between a fuzzed out John Coltrane sound to one of hard driving rock with Farfisa organ and blazing guitars and hard-edged vocals. Includes all their 45s releases plus other unreleased studio tracks. Don't pay $2,000 for an original copy of the acetate….just buy this release!!! CD $10 SKU:19301

MOUZAKIS - MAGIC TUBE PLUS 14 (Delaware power trio 70s psych-Label:GEAR FAB Before recording their great self-titled 1971 Psych LP, this band was previously known as The Fabulous Pharoahs. They recorded 7 45s on a variety of labels but this release also features 4 never before released tracks as well as their LP. CD $10 SKU:21723

ONES! -VOLUME ONE (1966 Connecticut psych gem)Label:GEAR FAB Finally we have uncovered a copy of this rare (R4) gem from back in 1966. Although these guys originated from Connecticut, they became one of the hottest opening acts in Boston in 1967, playing many of that city's best and most popular venues. Their renditions of the day's cover tunes are even better than the original songs CD $10 SKU:21710

PAPER GARDEN -ST (!968 psych obscurity Sgt Pepper style) Label:GEAR FAB The 1968 Psych obscurity LP from this previously unknown band from the New York area. Features liners by the newly-discovered band members. The mystery New York band that recorded this PSYCHEDELIC classic Lp in 1968. This five piece band intertwined screaming FUZZ guitar and dominant keyboards with the tastefull use of violins and some trombone to give it a 'Sgt. Pepperish' type of sound. They fully succeeded CD $10 SKU:21726

SKY FARMER - Amazing Grace (1971 country blues psych) Label:GEAR FAB “Country blues with tinges of psychedelia" -- a cross between J. Geils and It's A Beautiful Day. he Post-Mountain Bus R&B/Rock band that fromed in 1971 and continued on until 1975. Never before released studio and live sessions!! CD $10 SKU:21732

LOUISVILLE in the 60s - The Lost Allen Martin Tapes- Label:GEAR FAB Since the 1960’s, the Allen-Martin Studio in Louisville was the place to record for most of the bands in the region. In 2006 when Ray Allen and Hardy Martin retired, the studio closed, a group of music lovers (Jay Petach, Marvin Maxwell & Ed Amick) stepped in to rescue the tapes for the all of bands who had recorded there over the last forty-plus years .After a careful down select process, we chose these 18 previously unreleased tracks as the best representation of the over 100+ songs we sorted through: COMP CD $10 SKU:21234

PSYCHEDELIC STATES- INDIANA In The 60’s VOL 1-Label:GEAR FAB Featuring many never before heard bands. Many unseen photos and stories LATEST IN THE PSYCH STATES SERIES UNCOVERS MORE GARAGE MONSTERS, THIS TIME FROM INDIANA. INCLUDES TRACKS FROM THE ENDD, THE TIKIS, LORD & THE FLIES, SIR CHARLES & THE DAYS OF OLDE, THE SERFMEN, THE CHEVELLES AND MANY MORE. COMP CD $10 SKU:4896

PSYCHEDELIC STATES- TEXAS In The 60’s VOL 1-Label:GEAR FAB Many never before released and rare bands from '66-'68 with lots of photos and stories. Including 2 prev unre tracks by Bubble Puppy + bands like Pastels, Crabbs, Airhead, Pastels,etc. 18 tracks COMP CD $10 SKU:23196